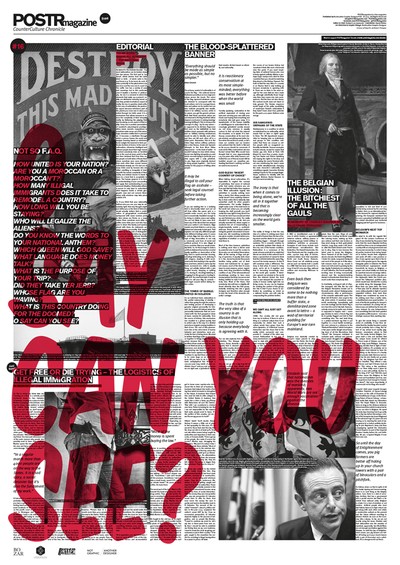 The word nationalism can be broken down into two pieces. The first part is 'national', which derives from the Latin nasci or birth - of which natio is the past tense (c.q. To be born). As such, it refers primarily to the place where one was born and the race one is a part of. The suffix -ism has a variety of uses and meanings but in this particular case it implies a doctrine or philosophy. An ism is a mindset in which the elements that make up a person's reality are attributed meaning based on how they pertain to whatever aspect of reality the ism in question deals with; in the case of nationalism, the particular aspect becomes whichever part of the planet your mom was in when you exited through her birth canal. It is a mechanism that allows humans to reduce the complexity of their everyday reality by flattening the playing field and focussing on one aspect of that reality. Every ism is another permutation of mankind's physiological predisposition (read: neurotic compulsion) to somehow make sense out of the seemingly senseless reality that is presented. It becomes a viewfinder through which a person frames the world and assigns meaning based on whichever factor weighs the heaviest in their particular doctrine of choice. In the case of nationalism, otherwise intelligent and rational people bend their logic based on where somebody drew an invisible line in the sand at some point in time and then declared that from then on, the people on both sides of those lines where somehow even more different from each other than normal human individuals already are. It is but one of many tricks used by humans who are either unwilling or incapable of dealing with the actual complexity of their reality and instead choose to dumb it down to a level that is acceptable to them. The human purpose is to form an understanding of your surrounding and apply that understanding to your personal situation. Nationalism allows a person to only have to understand what happens inside a certain geographic area and not concern themselves with whatever may take place outside of it.