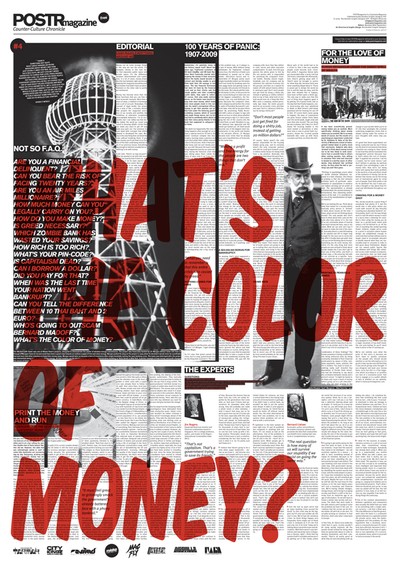 We’re back like an uncaring bailiff collecting an outstanding debt. During the past three months we submerged ourselves into the smelly, murky depths of humanity’s financial waters to finally resurface with the murdered truth between our claws. We’re still scrubbing off the stink that clings to our filth-stained minds, but as always, our unrelenting efforts have yielded a reward that justifies the valiant and bloody crusade that precedes its discovery: truth and understanding.

You can reap this moral reward without having to undertake the same painstaking excursion into the shady twilight of stocks & bonds by picking up a free copy of POSTRmagazine #4: The Money Issue at one of our distribution points. Be sure to bring a None Dollar Bill with which you can pay for the most free magazine that came at the highest cost!