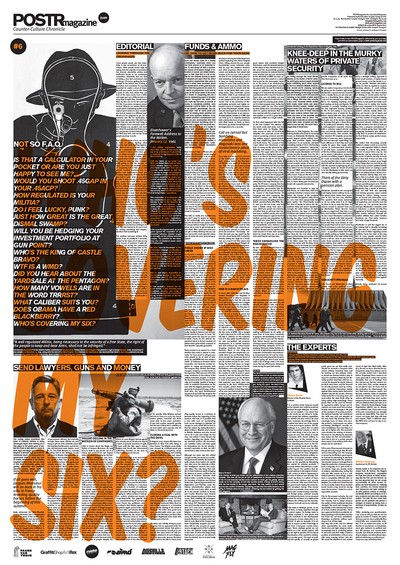 One would be inclined to forget, what with all the giant catastrophic oil spills polluting half the planet, our country’s Little League political elections and of course the World Cup footy taking place in South Africa, but the world is at war. Even as we speak, blood is seeping into shell-strewn sandy pavements and missile-blasted cave formations worldwide. Now if war is a product then a president is a corporate spokesperson; he delivers a well-prepared piece of PR-prose designed to fit the political equivalent of the commercial break’s 30" format, preferably from a badass location like the Briefing Room for optimal impact. But delivering that speech is only the last step in marketing a war. We’re not savages, meaning we don’t start wars overnight over a kidnapped princess or a deflowered maiden anymore. We calculate. We’ve learned that with war come the spoils, so in our modern world of economania, war comes with a budget. A budget that gets spent on armor-piercing bullets and warheads that can make the entire west coast of Europe evaporate with the push of a button and the twist of a missile key. Oh well, boys will be boys and the bigger they get, the bigger their toys. Which is something we were able to witness firsthand as we brushed sides with a few members of a SWAT-team who were just walking out of the shooting range we were visiting, hugging 9.mm Glocks and UZI submachine guns and showing off bulls-eye shots on cardboard cutouts of bad guys (them, not us). We want to know what the game costs; who’s charging who how much money for all this freedom? Who is paying the bill and what’s the standard tipping percentage for liberating an oppressed people from a dictator you sort of slightly helped come to power when you thought you might be able to do business later? And when are we going to finally see some of that worldpeace we’ve been hearing so much about for decades?

Pick up ‘POSTRmagazine#6: Funds & Ammo’ and find out for yourself.