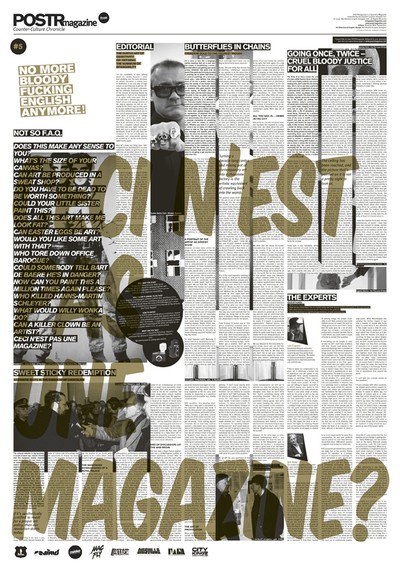 We're back with a new issue of the most critical and least considerate magazine you'll ever get for free. This time around, we are going to give the artworld a nice old kick in the shins. Why? Because it's a naughty little world that has gotten completely out of hand and it needs some long-overdue discipline. Yes, you could say that art is like the thermostat of our mental evolution. If you do say that, then you also have to concede the fact that right now, its gauge is pointing at 'decadent, incestuous game of greed that has forced actual creative expressions into a secondary role'. Art seems to be more about money than ever. Maybe that is because we've never had this many filthy rich retards with no sense of humanity before.

We are no experts in the field. Oh excuse us, we are no connoisseurs when it comes to art. I think that's probably best as well, since I have no intention of becoming one of those people who thinks that it's ok to spend millions upon millions on paintings they'll never look at again. I'd rather be uneducated and blind than knowingly take part in what has probably become the most expensive bottled fart ever. We hope that you do not agree with us and decide to counter our intensive investigative efforts with furious emails and deathtreaths about how we are complete savages who shouldn't be talking about stuff they don't understand, especially your favourite artist. You will enforce the already calculated correctness of our arguments.

We look forward to hearing from you.