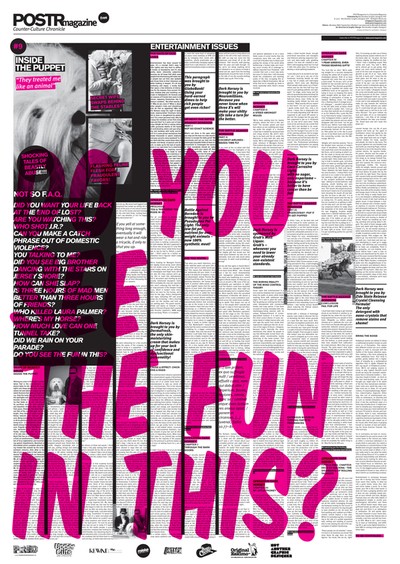 We're back like another season rerun of Friends which you'll watch because it's on at 8 and you just really need to kick back after a long day of work. In this issue, POSTRmagazine casts its scrutinizing gaze over the only industry that turns actual people into products without having to go to court for it: the entertainment business! Now we all know that there's no business like show business, but being who we are, we needed to know a little more than that. We wanted to know what happens after the credits roll and we cut to commercial. What happens when the studio audience goes home and there is no Applause-sign to hold up and drown out the painful silence. What fate befalls the star when the spotlight moves on to the next in line? Do the big studios have special dumpsters for when a teen singer outlives his or her expiration dates? What do you think the Hanson kids are doing today? And what about the rumored mass graves outside Hollywood where child stars go to die after they reach puberty?

This issue has been long in the making. It has cost us blood, sweat and the last shreds of innocence we had left to lose. To bring you this story, our editors had to look in places nobody wants to see. They may not recover. After the puppet-interview, one of them returned home severely traumatized and in need of therapeutic counseling. So when you read this issue, remember that we go through these lengths for you, our dear and beloved readers. We hope it's what you're hoping for.